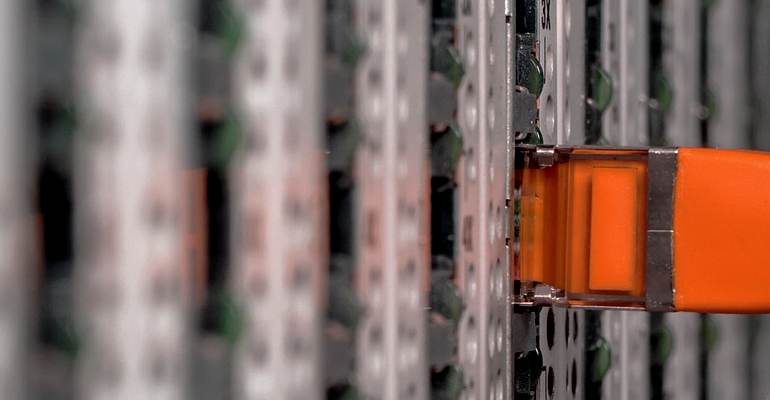 Unmetered Dedicated Server or Unmetered Server is a term that describes a Dedicated Hosting service, in which a physical or a virtual computing instance is connected to certain Internet connectivity port and the used data transfer isn't accounted in the service price.

The Difference Between Bandwidth And Data Transfer

There are two ways for the service providers to measure and bill for the Internet traffic (data transfer). They either charge for:

If someone buys a Dedicated Server connected to a 100 Mbps port, the overall capacity and speed of the Internet connection would be 100 Megabits Per Second. If a server in connected to 100 Mbps Internet connection the overall data transfer that can be transmitted in a 30-day period of time is 32.40 terabytes (TB). Here is the place to say that if any provider advertises a dedicated server with 50 TB data transfer on a 100 Mbps port, this is a misleading offering, as the one who signs up could never use those 50 terabytes

The server instances provisioned in most developed Internet service markets usually come with 1 Gbps Internet connection and certain contracted amount of data transfer. One can transmit a 324 terabytes (TB) of data through a 1 Gbps Internet connectivity port. Certain amount of those terabytes are usually included as contracted data transfer into the Dedicated Server Hosting plans. For example, an average offering for an entry-level dedicated hosting service in the United States looks like this:

What Does Unmetered Bandwidth Mean?

Bandwidth is a term that describes the maximum data transfer rate (also popular as speed) of the Internet connection. If a dedicated server is connected on 100 Mbps Internet bandwidth port, it can transmit 12.5 megabits per second of data. On a 1000 Mbps (1 Gbps) Internet connection this rate is 125 megabits of data per second.

So, the term Unmetered Dedicated Servers means server instances which are allowed to use the maximum bandwidth rate of the virtual or physical Internet connection port. If it is provisioned as 1 Gbps Unmetered Server, its user should be allowed to use up to 1000 Mbps Internet bandwidth.

Most people who need fast Internet connection with large capacity usually want to avoid paying for measured and used data transfer because it increases their monthly service bill. The Internet connection used in the data centers usually costs anywhere between $0.50 - $0.90 per 1 Mbps (bought from the lost cost ISPs such as Hurricane Electric and Cogent) or $3 - $15 per Mbps (contracted with any quality Internet service providers such as CenturyLink, Level3, Telia, NTT, Verizon, Sprint, AT&T, Zayo, KDDI, Internal, PCCW, TATA or any other similar Wholesale ISP). The price depends on the location and availability. Usually the more central the locations is, the cheaper the Internet connectivity is. Low cost Internet connectivity per mbps is usually available in the major metropolitan markets.

In order to provision a 1 Gbps Unmetered Dedicated Server (See how 1 Gbps & 10 Gbps Unmetered Dedicated Servers in Europe look like for example) to a client the web hosting provider has to reserve at least 1 Gbps Internet capacity. Otherwise its network might get congested and the content and service delivery would be either delayed or done with a low quality. So, data centers and web hosts usually reserve more Internet capacity than their actual usage, as there are always traffic peaks when their clients need to transmit a large amount of data in a short period of time.

Unfortunately there are a number of web hosts who oversell the capacity of their networks with the expectation that their clients would never use the contracted Internet bandwidth. It happens very often people to ask for full a 100 Mbps or 1000 Mbps Internet bandwidth port, despite that their actual usage is much lower. Here comes the difference between quality and quantity. Our suggestion is:

Project your Internet usage precisely. This will allow you to get a Dedicated Hosting with the highest possible quality at reasonable price.

Scenario (b) isn't something that people like to experience, as it will lower the quality of their service and the content delivery.

The best thing to do when signing up for a dedicated hosting service is to start with a metered data transfer and to secure a low cost price per mbps of the overage Internet traffic. For example if any server is expected to use 10 TB of data transfer per month on average, it might be possible to go up to 15 TB in certain months. So, it is important to sign a contract for a reasonably low cost of each terabyte of data transfer above the 10 TB commitment rate. Then it is also important to monitor the Internet usage.

As soon as the server starts going above 10 TB, go to the web host and upgrade the contracted data transfer limit. Once the average bandwidth usage goes above 60 Mbps (20 TB in measured data transfer per month), then it is worth to consider using 100 Mbps Unmetered Bandwidth port. In any other scenarios you'd either oversubscribe for Internet connectivity or pay a price lower than the reasonable one, taking the risk to experience a network congestion at any time.